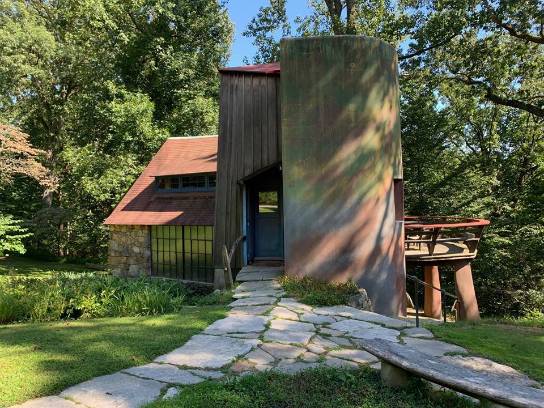 Tour of the Wharton Esherick Museum, so Popular We Have it Twice!

A private tour for four with a wine and cheese reception

The Wharton Esherick Museum is the home and studio of famed American artist Wharton Esherick, located atop Valley Forge Mountain in Chester County, Pennsylvania. It is our mission to preserve, maintain, and exhibit the artistic creations of the late Wharton Esherick so that the general public may gain enjoyment, education, and inspiration from Esherick's life work. We seek to act dynamically; connecting contemporary audiences to Esherick's legacy and brilliant creations through diverse public programs and community partnerships.

Set on 12 wooded acres, the Museum campus is comprised of multiple buildings including Wharton Esherick's Studio, which is now the centerpiece of the Museum. Esherick's highly individual, hand-built Studio was constructed over a 40-year period beginning in 1926, incorporating Arts and Crafts, Expressionist, and organic designs. Two years later Esherick began his 1928 Expressionist garage, now our Visitor Center. In 1973, just one year after its official opening as a museum, the Studio was added to the National Register of Historic Places. In 1993, the Museum was designated a National Historic Landmark for Architecture.