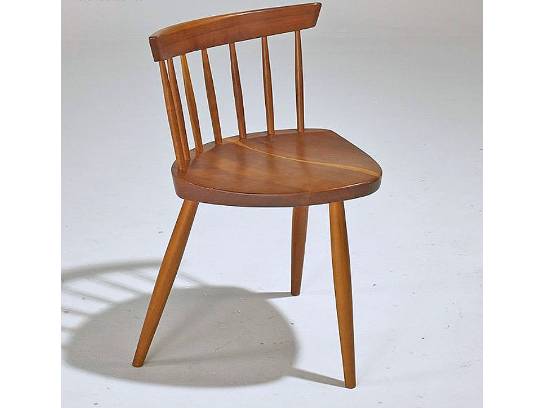 George Nakashima was born in Spokane, Washington in 1905 to Japanese parents who had immigrated to the United States. Educated and trained as an architect, Nakashima received his Master's degree in Architecture from M.I.T. in 1930. After the Pearl Harbor bombing, Nakashima and his family, like many other Americans of Japanese descent, were placed in an concentration camp in Idaho. Here he meet a Nisei woodworker and learned the art of Japanese woodworking. Because of sponsorship by his previous employer, Antonin Raymond, George Nakashima and his family were able to leave the camp and move to Pennsylvania. In 1944, he set up his workshop on the Nakashima homestead in New Hope, PA. He maintained and expanded his facilities in New Hope until his death in 1990.

Founder of Moderne Gallery, Robert Aibel's abiding interest in visual communication and education as well as an exceptional eye for quality and "the unusual" have built his reputation as a dealer and as a resource to other 20th century experts and to the press. His scholarly approach to the field has established him as an authority, particularly in French Art Deco, the American Studio Craft Movement, Wharton Esherick and George Nakashima. He is the author of several publications on art and communication - and on the work of George Nakashima and Wharton Esherick. He produced and directed several award-winning documentary films from 1972 - 1986. Aibel received his B.A., M.A. and Ph.D in Aesthetic Communication from the University of Pennsylvania. He was on the faculty at Drexel University and the University of Pennsylvania from 1974 to 1992.