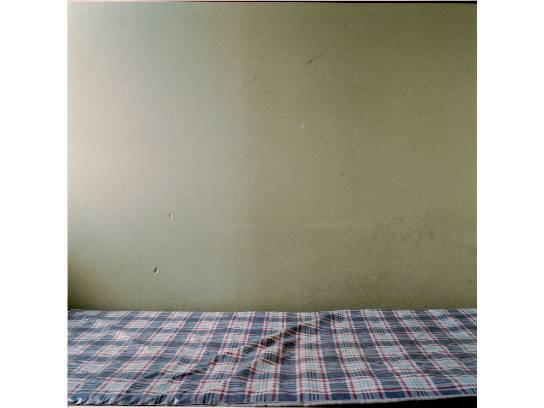 Image Description: Print No. 10 from the series Turn In, a series of large-scale formal studies of slept-in beds of homeless people in England and Wales. The photographs, which reference color field painting, consist of a blank expanse of wall anchored by a mattress filling the lower third of the frame. The title of the series refers both to going to bed and to closing in on oneself in self-reflection.

For more from the project, visit https://www.yossimilo.com/artists/martina-mullaney/

Photographer's Bio: Martina Mullaney is an Irish artist living and working in London. In 1999, she was commissioned by the British Council to participate in the third international artists gathering in Sri Lanka. Dinner for One, a series of photographic images that address lonliness through the decline of the daily evening meal, has toured Britain and Ireland. In 2005, Mullaney continued to depict this theme, this time photographing beds in hostels and shelters for single homeless people in England and Wales. Rejecting a traditional documentary approach, she makes formal studies of temporary sleeping quarters to produce the series of large-scale colour photographs, entitled Turn In. The title refers both to going to bed and to closing in on oneself in self-reflection and the work references both meanings too.