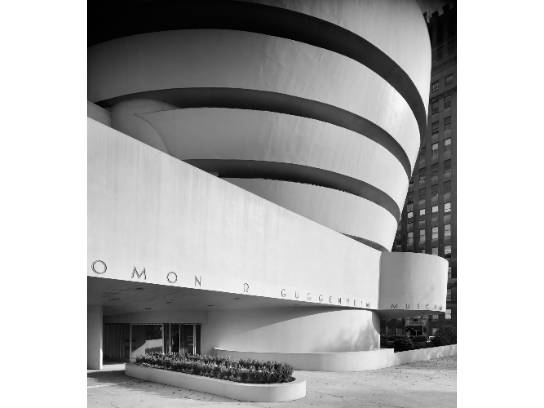 Image Description: Ezra Stoller (1915 - 2004) was considered to be the premiere photographer of Modernist architecture in the United States. He was commissioned by prominent modernist architects such as Frank Lloyd Wright, Paul Rudolph, I.M. Pei, Richard Meier, Marcel Breuer, and Eero Saarinen, to photograph their iconic buildings upon completion, such as Wright's Guggenheim Museum in 1959.

Photographer's Bio: Ezra Stoller began photographing buildings, models and sculpture as a student. In 1940-1941, he worked with the photographer Paul Strand in the Office of Emergency Management; after World War II, Stoller continued his career as an architectural photographer and also focused on industrial and scientific commissions. Over the next forty years, he became best known for images of buildings. Among the iconic structures he photographed are Fallingwater, the Guggenheim Museum, the Seagram Building, and the TWA Terminal. Often the images are as familiar as the buildings they document. Many modern buildings are recognized and remembered by the images Stoller created, as he was uniquely able to visualize the formal and spatial aspirations of modern architecture. During his long career as an architectural photographer, Stoller worked closely with many of the period's leading architects including Frank Lloyd Wright, Paul Rudolph, Marcel Breuer, I.M. Pei, Gordon Bunshaft, Eero Saarinen, Richard Meier and Mies van der Rohe, among others. Stoller died in 2004.