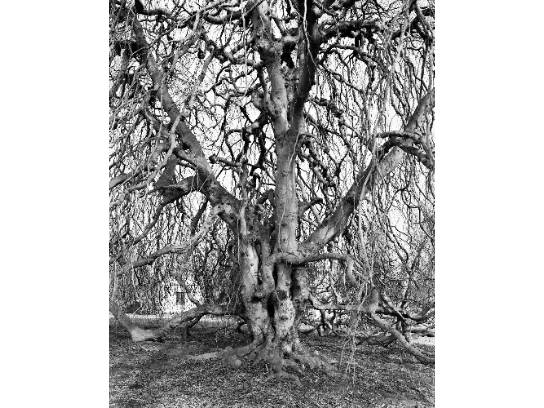 Image Description: This image is from "New York Arbor," a series of photographs of idiosyncratic trees that inhabit New York City; these pictures underscore the complex relationship between trees and their human counterparts. Rooted in New York's parks, gardens, sidewalks, and cemeteries, some trees grow wild, some are contortionists adapting to their constricted surroundings, and others are pruned into prized specimens. Many of these trees are hundreds of years old and arrived as souvenirs and diplomatic gifts from abroad. As urban development closes in on them, New York's trees surprisingly continue to thrive. The cumulative effect of these photographs is to invert people's usual view of their city: trees no longer function as background, but instead dominate the human life and architecture around them.

Photographer's Bio: Mitch Epstein, a photographer for over 50 years, helped pioneer fine-art color photography in the 1970s. His photographs are in numerous major museum collections, including New York's Museum of Modern Art, Metropolitan Museum of Art, and Whitney Museum of American Art; the J. Paul Getty Museum in Los Angeles; the San Francisco Museum of Modern Art; and the Tate Modern in London. His fifteen books include two recent volumes--Property Rights and In India, Family Business, winner of the 2004 Kraszna-Krausz Photography Book Award--and many others. Epstein was inducted into the National Academy of Design and has won the Prix Pictet, the Berlin Prize in Arts and Letters and a Guggenheim Fellowship.