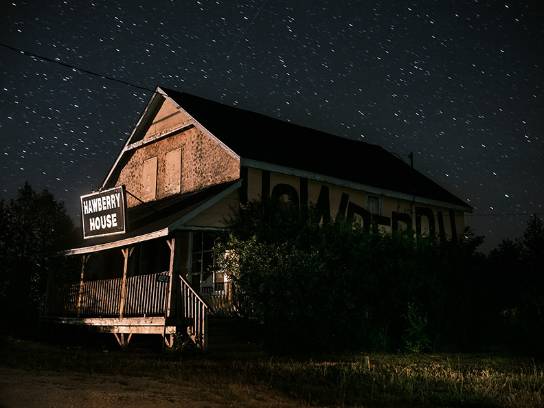 When the first European settlers reached Manitoulin Island in the 1600s they found an inhospitable environment covered by dense forests and lashed by harsh winters. According to local oral history, Indigenous elders advised the visitors to eat hawberries to prevent scurvy. To this day, the non-Indigenous people born on the island carry the "Haweater" nickname.

Manitoulin Island is the largest freshwater island in the world. Manitoulin, meaning "Spirit Island" in Ojibway, is sacred land to the "People of the Three Fires." After the war of 1812, in which some Indigenous nations fought alongside the British army, the colonial government declared Manitoulin an insular Aboriginal refuge. However, demand for land for settlers eventually prevailed, paving the way for colonization.

Today the island is among only a few places in Canada where Indigenous and non-Indigenous people coexist on the same land. Historically fraught, the relationship between the two groups is still affected by such fresh wounds as the Indian Act and residential schools. However, isolation, lack of employment and bucolic boredom bear the same impact on all islanders.

Since 2014, I have explored Manitoulin's social dichotomy through its mundane aspects, historical metaphors and contradictions, in the light of a silent assimilation advancing inexorably. I deliberately refrained from pursuing the crisis narrative often associated with Indigenous communities. Instead, I looked for images allegorizing the untold tale of coexistence, and the common challenges along blurred lines of neo-colonialism and multiculturalism - as the post-Truth and Reconciliation era continues to boost Canada's liberal reputation worldwide.

Giovanni Capriotti specializes in long-form in-depth documentary explorations that examine how time and inevitability of compromise shape individuals, communities, history, culture, and human condition. Through the integration of photography, moving images, experiential prose and personal testimonials, he strives to deepen his understanding of worldly affairs and the role of image making globally. Giovanni's work has been recognized by the World Press Photo Foundation, Pictures of the Year International, Dorothea Lange and Paul Taylor Prize, Lucie Foundation, Paris Photo Prize, News Photographers Association of Canada - and supported through grants from Italian institutions such as ISMEO and MIUR. His projects have been shown in exhibitions and installations at venues around the world, including the World Press Photo Foundation, Contact Photography Festival Toronto, NPAC, Italian Institute of Culture Montreal, DDProject Trieste, Tokyo International Foto Awards, IGR Bingham Cup Amsterdam 2018, Paris Photo Prize, ESOF 2020 Trieste. Giovanni is a member of Boreal Collective.