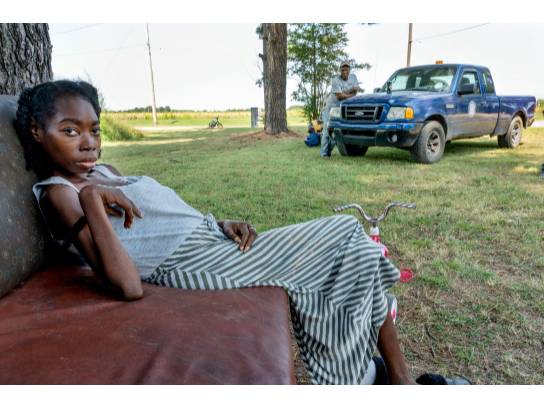 Portrait of Jessica at her family's home on the outskirts of Earle, Arkansas. From an upcoming book, The Day I Was Born (Many Voices Press, 2020)

Eugene Richards, photographer, writer, and filmmaker, was born in Dorchester, Massachusetts in 1944. After graduating from Northeastern University with a degree in English, he studied photography with Minor White. In 1968, he joined VISTA, Volunteers in Service to America, a government program established as an arm of the so-called" War on Poverty." Following a year and a half in eastern Arkansas, Richards helped found a social service organization and a community newspaper, Many Voices, which reported on black political action as well as the Ku Klux Klan. Photographs he made during these four years were published in his first monograph, Few Comforts or Surprises: The Arkansas Delta.

Upon returning to Dorchester, Richards began to document the changing, racially diverse neighborhood where he was born. After being invited to join Magnum Photos in 1978, he worked increasingly as a freelance magazine photographer, undertaking assignments on such diverse topics as the American family, drug addiction, emergency medicine, pediatric AIDS, aging and death in America. In 1992, he directed and shot Cocaine True, Cocaine Blue, the first of seven short films he would eventually make.

Richards has published seventeen books. Exploding Into Life, which chronicles his first wife Dorothea Lynch's struggle with breast cancer, received Nikon's Book of the Year award. For Below The Line: Living Poor in America, his documentation of urban and rural poverty, Richards received an Infinity Award from the International Center of Photography. The Knife & Gun Club: Scenes from an Emergency Room received an Award of Excellence from the American College of Emergency Physicians. Cocaine True, Cocaine Blue, an extensive reportorial on the effects of hardcore drug usage, received the Kraszna-Krausz Award for Photographic Innovation in Books. That same year, Americans We was the recipient of the International Center of Photography's Infinity Award for Best Photographic Book. In 2005, Pictures of the Year International chose The Fat Baby, an anthology of fifteen photographic essays, Best Book of the year. Richards's most recent books include The Blue Room, a study of abandoned houses in rural America; War Is Personal, an assessment in words and pictures of the human consequences of the Iraq war; and Red Ball of a Sun Slipping Down, a remembrance of life on the Arkansas Delta.