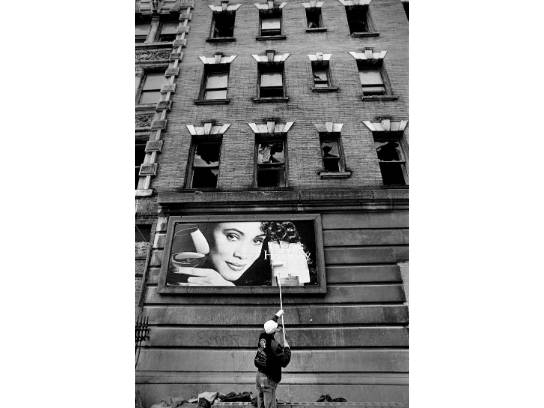 Signed on verso and recto

Bronx, 1990. Activist painting over Hennessy liquor billboard, one of thousands that cover poor neighborhoods around NYC.

I took this photo as I followed a group of activists who were painting over cigarette and alcohol billboards which were everywhere in the Bronx, Harlem and Brooklyn. You rarely saw these billboards and ads in Manhattan or wealthier neighborhoods and the activists, many allied with local churches, were dedicated to their eradication. This print is a silver gelatin print from the original negative that I did myself. I selenium toned the print as well for archival purposes.

Michael Kamber has worked as a journalist for more than 25 years. Between 2002 and 2012, he worked for The New York Times, covering conflicts in Iraq, Afghanistan, Liberia, the Sudan, Somalia, the Congo, and other countries. He was the first person in New York Times' history to routinely file photos, videos and written articles to the paper. His photographs have also been published in nearly every major news magazine in the United States and Europe, as well as in many newspapers. In 2011, Kamber founded the Bronx Documentary Center, an educational space dedicated to positive social change through photography and film. Kamber is an adjunct professor at Columbia University. He is the winner of a World Press Photo award, the Mike Berger Award, the Society of Professional Journalists Deadline Club Award, American Photo Images of the Year, and is a member of The New York Times team that won a 2003 Overseas Press Club award. The New York Times twice nominated Kamber's work for the Pulitzer Prize.