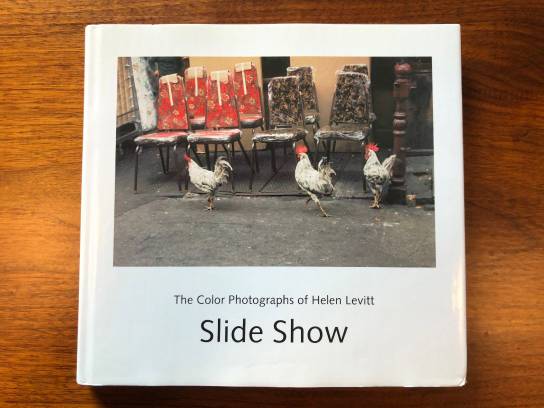 In 1959, and again in 1960, Helen Levitt received grants from the Guggenheim Foundation to photograph in color on the streets of New York, where she had photographed two decades earlier in black-and-white. But tragically, the best of these pioneering color pictures were stolen from her apartment in 1970 and she had to start over again. In 1974 the new work was shown as a continuous slide projection at New York's Museum of Modern Art-an early example of a slide show presentation by a museum and one of the first exhibitions of serious color photography anywhere in the world.

Slide Show presents more than one hundred photographs-including eight surviving images from the 1959-60 series-more than half of which have never been exhibited or published before. This impressive monograph is a worthy successor to her magnum opus, Crosstown (powerHouse, 2001), which included the largest collection of her color pictures to date, and to her more intimate volume of black-and-white work, Here and There (powerHouse, 2004), which presented more than eighty "unknown" Levitts taken over six decades.

Helen Levitt (1913-2009) had her first solo exhibition at the Museum of Modern Art, New York, in 1943. Levitt's photographs appeared in Edward Steichen's landmark 1955 show The Family of Man and in more recent exhibitions of great importance, including MoMA's Photography Until Now and the National Gallery of Art's On the Art of Fixing a Shadow in Washington, D.C., both celebrating the invention of photography. She has been the subject of numerous retrospective exhibitions at the Metropolitan Museum of Art and the International Center of Photography, New York; the Museum of Fine Arts, Boston; and the San Francisco Museum of Modern Art. Levitt's reputation as New York City's master street photographer was further cemented in 2001 when her photographs were featured in the opening sequence of Ken Burns' acclaimed PBS documentary series, New York. The author of the critically acclaimed, best-selling monographs Crosstown, Here and There, and Slide Show (powerHouse Books, 2001, 2004, and 2005), Levitt lived and worked in New York City, naturally.

John Szarkowski is director emeritus of the Department of Photography at the Museum of Modern Art, New York and was the director of the department from 1962 to 1991, in which time he oversaw more than one hundred exhibitions and the inauguration of MoMA's photography collection galleries, and edited and contributed writing to various publications. His exhibitions include New Documents, Mirrors and Windows, Photography until Now, and retrospectives of Henri Cartier-Bresson, Walker Evans, Diane Arbus, and Eugène Atget. Szarkowski is the recipient of the International Center of Photography Infinity Awards for Writing and for Lifetime Achievement, the Royal Photographic Society Progress Medal, and the National Arts Club Gold Medal for Photography, to name a few. He has taught at Columbia, Cornell, Harvard, and Yale. Szarkowski returned to picture making in 1991, and has exhibited his work at Pace/MacGill Gallery, New York and the Cleveland Museum of Art. He lives in New York.