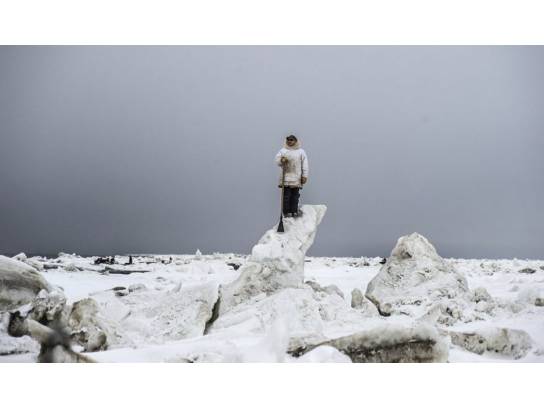 Gordon Omnik stands on watch to spot bowhead whales. The local Inuit community is allowed to catch 10 of them each year. Normally, the hunting starts when the sea ice breaks in the spring: the whales migrating up north use the channels to come up to breathe. If the ice melts, the whales can swim around with more ease, which makes them much harder to hunt. Point Hope, Alaska, USA, May 2018. © Kadir van Lohuizen - NOOR for Fondation Carmignac

Kadir van Lohuizen (The Netherlands, 1963) has covered conflicts in Africa and elsewhere, but is probably best known for his long-term projects on the seven rivers of the world, the rising of sea levels, the diamond industry and migration in the Americas. He started to work as a professional freelance photojournalist in 1988 covering the Intifada. In the years following, he worked in many conflict areas in Africa, such as Angola, Sierra Leone, Mozambique, Liberia and the DR of Congo. From 1990 to 1994 he covered the transition in South Africa from apartheid to democracy.

After the collapse of the Soviet Union, Kadir covered social issues in different corners of the former empire. In 1997 he embarked on a big project to travel along the seven rivers of the world, from source to mouth, covering daily life along these lifelines. The project resulted in the book "Rivers" and "Aderen" (Mets & Schilt). Kadir has received numerous prizes and awards in photojournalism. In 2000 and 2002 Kadir was both a jury member of the World Press Photo contest and on the supervisory board of the World Press Photo foundation. In 2004 he went back to Angola, Sierra Leone and the DR of Congo to portray the diamond industry, following the diamonds from the mines to the consumer markets in the western world.

In that same year, Kadir initiated a photo project together with Stanley Greene and six other photographers on the issue of violence against women around the world. After hurricane Katrina destroyed New Orleans, he made several trips to the USA to document the aftermath of the storm. In the summer of 2010, to mark the fifth commemoration of Hurricane Katrina, Kadir exhibited images of Katrina's devastation and the aftermath in a truck-exhibition that drove from Houston to New Orleans, a project in collaboration with Stanley Greene.

From 2011 to 2012, Kadir created Via PanAm; a visual investigation on migration in the Americas. In 12-months, he travelled along the Pan American Highway from Terra del Fuego in Patagonia to Deadhorse in Northern Alaska. With the project Where will we go, Kadir looked at the global consequences of rising sea levels caused by climate change.

Kadir's environmental projects continue with 'Wasteland', where he investigates in six megacities (Jakarta, Tokyo, Lagos, Amsterdam, São Paulo and New York) how they manage or mismanage their waste. For this project he uses photography, video, drone footage and audio. For this project he received 1st World Press Photo Prize in the Environmental category. In 2018, Kadir van Lohuizen and Yuri Kozyrev were the laureates of the 9th Prix Carmignac for Photojournalism, where they undertook a year long expedition through the Arctic, documenting the consequences of the climate crisis.

Kadir is a frequent lecturer and photography teacher and is based in Amsterdam.