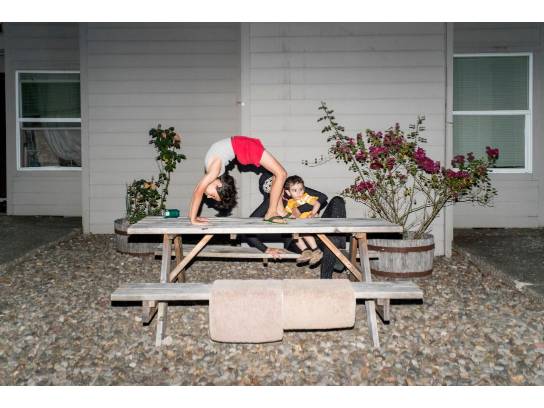 This image is from a body of work called "Buzzing at the Sill," which was undertaken on Peter van Agtmael's return home to America after years as a war correspondent in Iraq and Afghanistan, trying to understand his experience and his country. During the September 11 attacks and the invasion of Iraq, he was a history student at Yale; he spent the subsequent years documenting the wars that followed and the parallel lives of Americans back home. The work is a mixture of reflections on war, memory, militarism, identity, ethnicity, social class, surrealism and landscape. 'Buzzing at the Sill' is the continuation of "Disco Night Sept. 11," van Agtmael's last book about the wars in Iraq and Afghanistan. Upon the publication of "Buzzing at the Sill," van Agtmael was interviewed by his friend, contemporary and fellow Magnum photographer Thomas Dworzak about documenting America and the conditions that led to the inevitability of Trump's rise to power.

Peter van Agtmael was born in Washington DC. He studied history at Yale, graduating with honors in 2003. Since 2006 he has primarily covered the 9/11 Wars and their consequences, working extensively in Iraq, Afghanistan and the USA.

He has won the W. Eugene Smith Grant, the ICP Infinity Award for Young Photographer, the Lumix Freelens Award, as well as awards from World Press Photo, American Photography Annual, The Pulitzer Center, The Center for Documentary Studies at Duke University and Photo District News.

In 2008, he helped organize the book and exhibition Battlespace, a retrospective of largely unseen work of 22 photographers covering Iraq and Afghanistan.