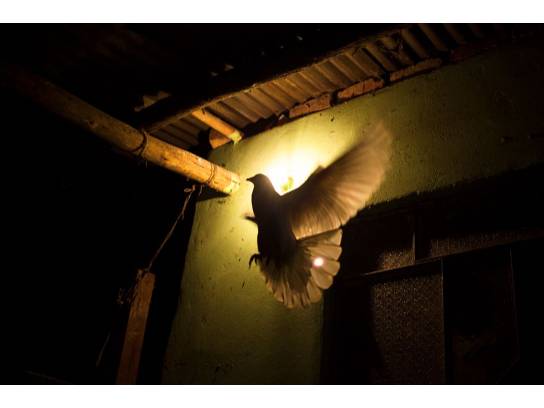 Signed on recto and verso

A dove flies to its nest at Orlando's house. Orlando is an ex-combatant from Colombia's second biggest guerrilla group - The National Liberation Army (ELN). He joined when he was 7 years old, after being raped and, consequently, rejected by his family. Jan. 31, 2016. Cundinamarca, Colombia. © Erika Pineros

Erika Pineros is a multimedia journalist covering human rights and socio-political issues, based between Latin America and Southeast Asia.

She has reported on sexual violence, internal forced displacement, kidnapping, the reintegration of ex-militants from illegal armed groups into society, and the impact of drug policies on the livelihoods of coca farmers.

Sha has also documented Cambodia's post conflict rapid development and its impact on the Cambodian population including land grabs, civil unrest and the recession of natural resources.

Her has been published in news outlets such as IRIN News, America's Quarterly, Foreign Policy, CNN International and Le Monde; and she has produced communication materials for humanitarian organizations including Save the Children, CARE, UNICEF, Handicap International and BBC Media Action.