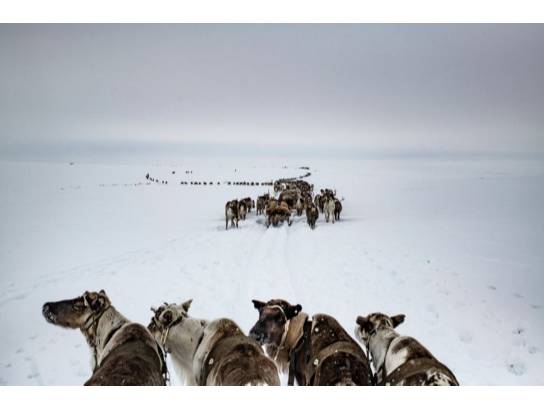 The Serotetto nomadic herding family (officially the 8th Brigade of the Yar-Sale state farm) move their reindeer northward from winter pastures to summer pastures. The herds in the peninsula usually range from 50 to 7,000 heads and the migration pattern depends on seasons and on the continuity of lichen pastures. For the first time, the Serotetto family could not finish their transhumance this year because of the permafrost melting. Yamal Peninsula, Russia, April 2018. © Yuri Kozyrev - NOOR for Fondation Carmignac

As a photojournalist for the past 25 years, Yuri Kozyrev (Russia) has witnessed many world-changing events.

He started his career documenting the collapse of the Soviet Union, the last empire of our modern times, capturing the rapid changes in the former USSR for the LA Times during the 90's. In 2001, Yuri started to cover international news. He was on the scene in Afghanistan after September 11, 2001, and lived in Baghdad, Iraq, between 2002 and 2009, arriving before the war. During those Iraqi years, he was a contract photographer for Time Magazine and traveled all over the country, photographing the different sides of the conflict.

Since the beginning of 2011, Yuri has been documenting the "Arab Revolutions" and their aftermaths in Bahrain, Yemen, Tunisia and especially Egypt and Libya.

Yuri has received numerous honors for his photography, including several World Press Photo Awards, the OPC's Oliver Rebbot Award, and the ICP Infinity Award for Photojournalism. In 2008 he received the Frontline Club Award for his extensive coverage of the Iraq war.

His extensive body of work documenting the "Arab Revolutions" received wide industry recognition. "On Revolution Road" - on the revolts in Egypt, Bahrain, Yemen and Libya made for Time magazine - won the 2011 Visa d'or News at the international festival of photojournalism Visa pour l'Image.

At the Prix Bayeux-Calvados his work "Dispatch from Libya" won both the Trophee and the Public Prize. In 2012 his work was awarded at the World Press Photo Contest and he was named the 2011 Photographer of the Year in the Pictures of the Year International competition.

Yuri's work has been widely exhibited. Some of his more recent exhibitions are "Russie[s]", a unique showcase of work from Russia, exhibited together with Stanley Greene in Paris at La Maison de la Photographie Robert Doisneau and the group exhibition "Révolutions Arabes" curated by Alain Mingam.

Between 2011 and 2012, his work "On Revolution Road" has been shown in ten different countries. In 2014, Yuri covered the conflict in eastern Ukraine and in 2015 the migrant crisis in Europe.

In 2018, Kadir van Lohuizen and Yuri Kozyrev were the laureates of the 9th Prix Carmignac for Photojournalism, where they undertook a year long expedition through the Arctic, documenting the consequences of the climate crisis.