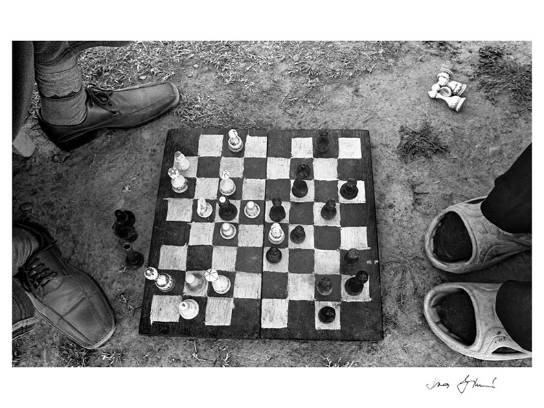 Men gather for a game of chess in the early evening.

I watched two men playing chess for some time before I decided to make this picture. I felt I had to take a picture from above. The man who was wearing shoes was winning over the man in sandals. I think it can be seen in the photo, who is winning, who is more confident, and who is losing.

Iva Zímová was born in former Czechoslovakia. She graduated from the School of Industrial Art in Jablonec nad Nisou, with a specialization in jewelry (1977). In 1982, she immigrated to Canada where she studied at the Dawson College Institute of Photography (1987-1990), and then continued her study at Concordia University with a major in photography (1990-1993).

In 1992, she was awarded the Canada Council Grant to photograph Czech minorities in Romania and in 1993, she received a grant by the Ministère de Culture du Québec to document the native people of northern Québec.

In 1994, she was contracted by the Canadian International Development Agency to record aspects of everyday life in Ukraine through photographs.

In 1999, she documented the diversity of CAW workers (National Automobile, Aerospace, Transportation and General Workers Union of Canada).

Since 1997, she has been contributing her work to the Czech NGO, People in Need. She has exhibited her work alongside others internationally in Ukraine, China, Canada, the Czech Republic, Ethiopia, Russia, Georgia, the United States, and Mexico.

Iva lives for her photography and uses her manifest talent in service of the persecuted and the forgotten: Indians, gypsies, refugees, orphans, and the deeply impoverished. Her camera does not condescend to pity her subjects; it humanizes their plight and ennobles them as survivors that few will ever know.

Iva is represented by Panos Pictures.