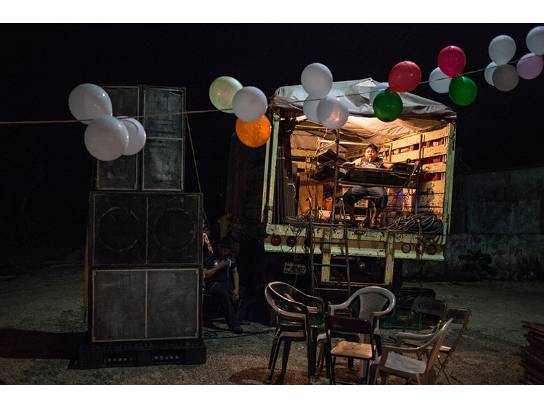 Signed on verso with ink seal

I lived for a time in the Yucatan peninsula. I was working on a project in Mexico to understand how the country was configured from the war against drug trafficking. Although my reading of the country at first was a little superficial, with time it became an idea of understanding this country through the Mexican revolution and that showed that the laws belonged to the most powerful, or whoever could apply the law on their own terms.

The idea of "the hunt" had always been present in the project due to the story of a hunter from Nuevo Leon named Don Alejo who faced criminals and died in the attempt; he became a symbol for Mexico.

During my time in the Yucatan, I met a community of hunters. I wanted to film a traditional hunt since one of the stories I was interested in had to do with the town of Tihosuco, where the caste war began in the mid-1800s, and which later remained abandoned after the war before the Mexican revolution. The town was repopulated in the early 1900s by hunters who were searching in the hills for turkeys and deer, but found some abandoned colonial buildings that became their home.

I became very close with the family of hunters and have photographed their celebrations for them. I became the "photo godfather" for family celebrations like quinceaneras, baptisms, and even a wedding I was supposed to attend in May (but was canceled due to COVID). A photobook of this project is set to be released in two months and the project has been exhibited as a solo show in Centro de la Imagen in 2017 in Mexico City and in Centro Fotografico Manuel Alvarez bravo in Oaxaca in 2018.

Mauricio Palos (b. 1981 San Luis Potosi, Mexico) is a documentarian and cultural promoter. His work explores a variety of issues that deal with historical memory linked to political crises and land conflicts. His first book My Perro Rano, Chronicles of Central America, was published in 2010 by Editorial RM with the support of the Ford Foundation and the National Fund for Arts and Culture in Mexico. My Perro Rano, Chronicles of Central America was chosen as one of the Best Photobooks of 2011 by the British Journal of Photography.

Palos holds a B.B.M. by the Universidad del Valle de Mexico and a Marketing Expert diploma by the Universidad Europea de Madrid. He is also the founder and director of the Centro Cultural Tenexcalco, a cultural center located in the Huasteca Potosina at his hometown of San Luis Potosí, a rural area surrounded by common lands and private ranches. The project is designed to bring about and merge artistic cultural activities in small rural communities.

Palos is a regular freelance contract photographer for Bloomberg and currently a grantee of the National System of Creators of the Ministry of Culture in Mexico (2019-2022).