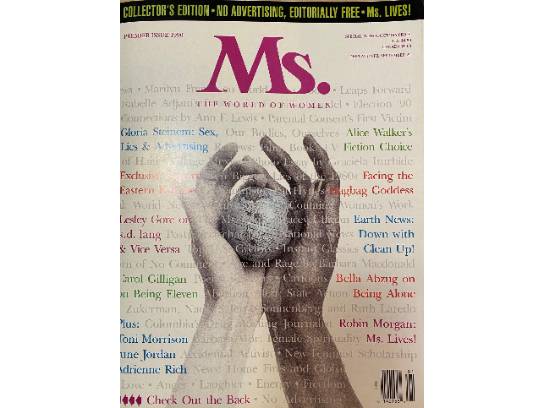 SIGNED, PREMIER Copy Of The 1990 Ad-Free Relaunch Of Ms. Magazine, When The Iconic Feminist Magazine Was Revived By WMC Founders ROBIN MORGAN, Who, As Editor-In-Chief, Led The Re-Envisioning Of Ms., And GLORIA STEINEM, Whose Landmark Expose, "Sex, Lies And Advertising" Anchors The Issue. This Pristine COLLECTOR'S EDITION Is Signed By 12 Members Of The Launch Staff - Including GLORIA STEINEM, ROBIN MORGAN And Other Members Of The WMC Team: BARBARA FINDLEN, WMC Features Editor, MARY THOM, Who Previously Held That Post, And HELEN ZIA, WMC Board Co-Chair Emerita. This Premier Issue Ushered In A New NO ADS Era For Ms. Magazine, Liberating It From Advertisers' Influence And Censorship Over Women's Magazines And Gender-Related Content. Also Featured Is Jane O'Reilly's Revisit Of Her Landmark 1972 Article, "I Want a Wife," Which Appeared In The 1972 Ms. Launch; And Robin Morgan's Interview With Her Dear Friend And Singer Lesley Gore (It's My Party and I'll Cry if I Want to). This Is A Very Rare Copy Of A Limited Run Launch Issue With 12 Original Signatures; It Is In Pristine Condition.

Final price includes shipping within the United States. An additional fee will be incurred for all international shipments.