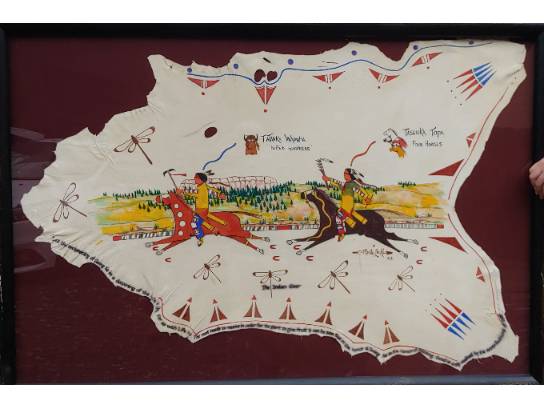 It Was Painted In Ledger Art By Lakota Artist Merle Locke To Honor The Work Of Rebecca Adamson, WMC Board
Member, Indigenous Economist And Activist Of Cherokee Descent. Rebecca's Poem Explaining The True Understanding Behind The Phrase "Indian Giver", Was Written In 1991 And Was First Published On A Ben And Jerry's Poster That Still Hangs Today In The Ben And Jerry's Ice Cream Museum In Vermont. The First Stanza Of "Indian Giver" Was Printed On The Containers For Their Blueberry Ice Cream To Celebrate The Company's Partnership With The Passamaquoddy Tribal Nation Blueberry Farms. This Same First Stanze Of "Indian Giver" Appears Along The Border Of The Hide. The Entire Piece Measures 5' 3" Wide And 3' 6" Tall. The Full Poem Follows Below:

Let there be no purpose in giving save reciprocity.
For to a people whose spirituality lies within Life's wholeness
Who share the gifts of the sky and the mountains and the seas and the forests
Who exchange abundance in the circle of animal brethren
Giving is not a matter of pure altruism and benevolence
But a mutual responsibility
To make the world a better place.

Let there be no purpose in receiving save reciprocity.
For a society whose belief in humanity lies within the interdependence of people
Who hold the deeply universal good of community values and
Where children are the generation of our People
Giving is seen in the entirety of receiving

Let the reciprocity of giving lie in a deepening of the Circle of Life.
For as with Life where
The root needs to receive in order for the plant to give fruit
It can be seen that in the honor of giving
As in the honor of receiving
Good is only realized by the contribution of both.

Final Price Includes Shipping Within The United States. An Additional Fee Will Be Incurred For All International Shipments.