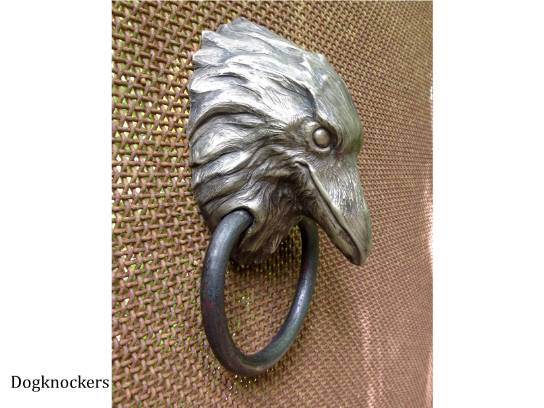 Raven doorknocker, made with cast nickel-silver resin and hand-forged steel ring. It is given a black patina that makes it look like cast antique pewter, and then a clear UV protective coat. Created, signed and numbered by artist Kerry McGuire.

Many references to ravens exist in world lore and literature. Most depictions allude to the appearance and behavior of the wide-ranging common raven (Corvus corax). Because of its black plumage, croaking call and diet of carrion, the raven is often associated with loss and ill omen. Yet its symbolism is complex. As a talking bird, the raven also represents prophecy and insight. Ravens in stories often act as psychopomps, connecting the material world with the world of spirits.

French anthropologist Claude Lévi-Strauss proposed a structuralist theory that suggests the raven (like the coyote) obtained mythic status because it was a mediator animal between life and death. As a carrion bird, ravens became associated with the dead and with lost souls. In Swedish folklore, they are the ghosts of murdered people without Christian burials and, in German stories, damned souls.

Item will be shipped to winner from donor.