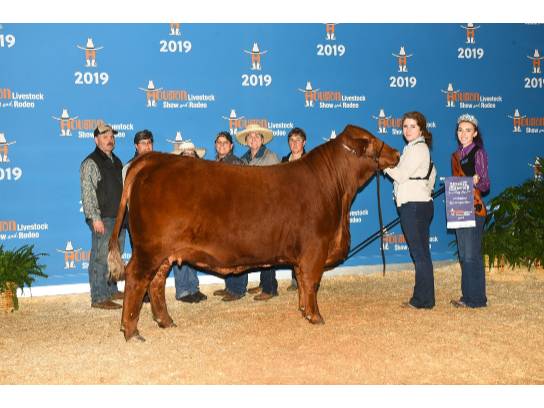 An opportunity to flush RBF Evita 175E7 to the bull of your choosing. Evita stems from true Red Brangus royalty, sired by the 2015 National Champion TJR Red Dynasty 198/A and out of the donor TRIO'S MLS Angelfire 175A. Angelfire herself is also no stranger to the backdrop, most notably as the 2015 San Antonio Grand Champion Red Female, Grand Champion Red Female at the 2015 IBBA Futurity, and the 2016 Grand Champion Brangus Female at the FWSSR. Her 175 cow family is a legendary Red Brangus maternal line in the Red Brangus world with TRIO's Wildfire 175W as her granddam. Evita herself is well on the way to proving herself as a matron, having weaned a heavy, high quality May 2019 born heifer calf that we unfortunately lost to injury before her first birthday, and she is on schedule to calve at 365 days for a May 2020 calf.

After our fortuitous acquisition of Evita through the IJBBA Legacy Foundation in 2018, we made the decision to go ahead and continue to exhibit her as a way to promote and support the Junior program. In doing so, Evita was selected as the Reserve Grand Champion Red Female at the 2018 NJBS. In addition, she subsequently went on to secure the Reserve Red Junior Division Champion slot at the 2018 Western National, 2018 NSOM, and the 2019 International Brangus Show, as well as the Junior Division Champion at the FWSSR Regional Brangus show.

We anticipate Evita being available to flush after June 15, 2020. Flush may be conventional or IVF, to be performed at the Reprologix satellite facility at ShowMe Genetic Services in Strafford, MO. We will guarantee 6 transferable embryos, with a minimum of two pregnancies from those 6 embryos. If requested, they will be qualified for export. All flushing and shipping costs to be assumed by the buyer of the flush. Transportation to the facility will be provided by Wyman Creek.