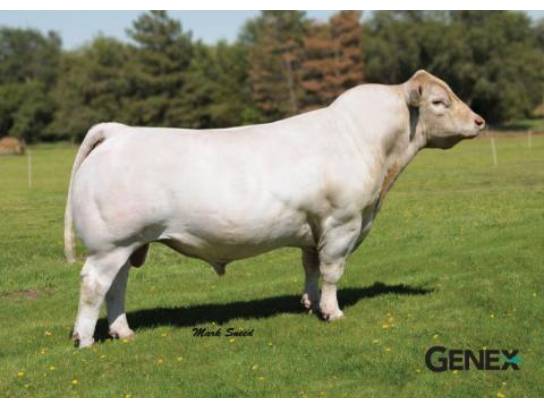 · The sire of this mating, Fire Water, was the 2007 National Champion Charolais Bull. His dam is the infamous Thomas Swisser Sweet 1764, better known as Zsa Zsa who was named the 2005 National Charolais Female as a cow calf pair and went on to sell for $60,000. His sire, Thomas OAHE Wind 0772 was the 2002 Denver Champion Charolais bull and went on to sire 3 other National Champion Bulls. Fire Water continues to sire numerous champions in the show ring including three of the four 2010 National Champions and again in 2011 both the National Champion Bull and Heifer. He was the #1 2010 - 2011 and 2015 - 2016 Show Sire of the Year, #2 Show Sire of 2016-2017. Roll of Excellence Sire #82. Ranking in the top 8% for Milk and the top 15% for MTL, the top 3% for SC and REA. Fire Water remains a perennial favorite for siring cattle with structural correctness, an immense amount of power and the show ring look designed for a champion.

· The dam of this mating Spur Ms Limestone 1Z643 was Standridge Cattle Co.'s pick of the Spur herd prior to 74-51 acquiring her from Standridge from the 2014 Red Dirt Divas Sale.