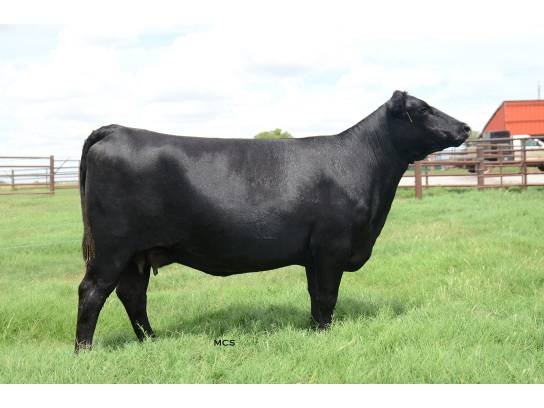 · The sire of this mating is a herd sire for 74-51 Cattle Company, Pembrook Cattle Company, Conley Cattle, J-6 Farms, Gamble Angus, Trowbridge Angus, and Partisover Ranch that was selected as one of the top sellers from a past Sitz sale.

· The dam of this mating was a ranch favorite at 74-51 before being selected by Pralle Farms from the 74-51 dispersal sale. She is a full sister to the $50,000 valued 74-51 High Noon 4011 whose 1/2 interest was selected by Jesse Lewis out of the 2015 Red Dirt Bull Sale. High Noon was Reserve Calf Champion Angus Bull at the 2015 National Western Stock Show and Reserve Champion Angus Bull at the 2015 Tulsa State Fair.

· The grand-dam of this mating, Lucy P061, has been one of the most consistent producers in the 74-51 herd, as is evident in not only her daughter who sold to Holder Land & Cattle, Brent Panell, and Pembrook Cattle Company for $18,750 in the 2014 Diva Sale, but also in her Ľ Simmental ľ Angus daughters featured in the 2013 Red Dirt? Divas Sale that sold for $7,500 to Reimann Ranches in South Dakota and Brooke Adams in Texas as well as her seven sons featured in the inaugural Red Dirt Bull Sale that averaged $5778 and included the $15,000 "Aftermath" who is now a herd sire at Pembrook Cattle. In the Spring 2014 Red Dirt Bull Sale, sons sold for $7,250, $7,000, and $6,500 while a grand-son sold for $5,750. She also produced the 2012 National Champion Pen of Three Percentage Simmental Bulls at the National Western in Denver.