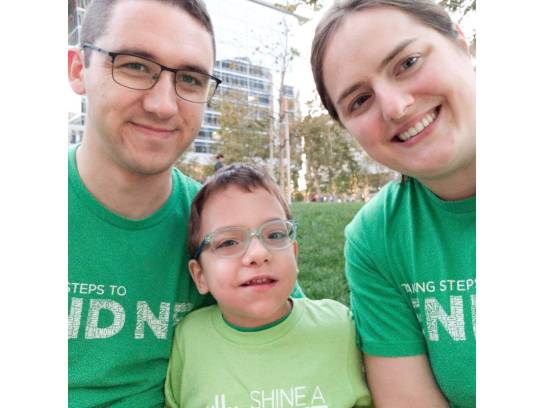 Katie Chiaratti originally hails from a small town outside Sacramento where she met her husband Nick. After graduate school, the Chiarattis moved to Ohio where Nick was stationed as an engineer in the US Air Force. They had their son Teddy there in 2015. Born three months early, Teddy had to be resuscitated at birth. He suffered a severe brain bleed that caused damage to his vision centers and multiple other areas. Teddy spent four and a half months in the NICU, enduring five neurosurgeries which involved placing shunts to control hydrocephalus. Since he was born, he has had over a dozen specialists and countless therapies.

"We received orders to Los Angeles from the Air Force," Katie remembered. "Finding a great school for Teddy was a top priority. Teddy's grandma toured a few schools in the area, and we quickly decided on BCC even though it was much further from the Air Force base." Teddy began school shortly after the Chiarattis arrived last April and the whole family fell in love with BCC immediately. "I love the small class sizes, the mix of typically and atypically developing children, and the way the curriculum is tailored to each child's needs." Katie herself has a background in child development, an elementary school teaching credential, and master's degree in education from UC Davis so she knows a good school when she sees one! Thanks to you, Nick and Teddy for being a part of our upcoming gala and part of our ever-expanding family.

You can support Katie and her family by donating to the Blind Children's Center or purchasing tickets or sponsoring the event - She'd love to see you there! Please type "Chiaratti" in the Company/Group Name field when completing the Purchaser Form so that the team at BCC knows you are supporting her!