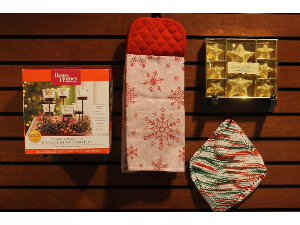 This package includes a 6 tea light centerpiece accented with berries and pinecones, a set of 6 glittery star candles and a Christmas towel and washcloth (set handmade by Mary Jane Klaybor and Kathy Lentych.