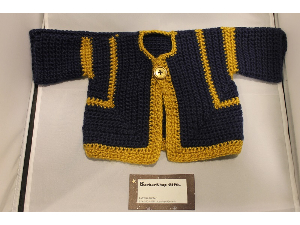 This beautifully fashioned blue and gold infant sweater (size 0-3 months) was handmade by Kathleen Barber of BarberShop gifts. It is made from 100% acrylic yarn and is hand washable.