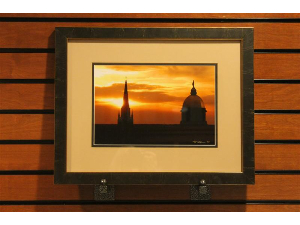 Signed and Custom Framed Photo of Notre Dame Basilica. A 19 ¼" x 15 ¼" original photo signed by photographer, Matt Cashore, and custome framed by The Frame Factory of the Notre Dame basilica and golden Dome at sunset.