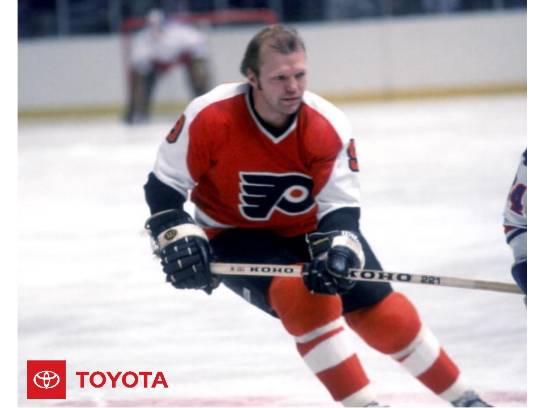 Have lunch at Chickie's & Pete's in Marlton, NJ with a former member of the "Broad Street Bullies" team, Bob "the Hound" Kelly!
Bob Kelly was an integral part of the Flyers two Stanley Cup victories in 1974 and 1975. Over the course of his career, "the Hound" tallied over 350 points and over 1,400 penalty minutes!
Ask Bob questions about the "Broad Street Bullies" era, one of the most popular times in Philadelphia sports history, over lunch!

Bio: Selected in 1970 by the Philadelphia Flyers, Kelly was an aggressive left-winger who became a member of the famous "Broad Street Bullies" and helped guide the Flyers to their two consecutive Stanley Cup championships in 1974 and 1975. Along with teammate Dave "the Hammer" Schultz, Kelly was one of the team's top enforcers.

He is now the Flyers' ambassador of hockey, visiting schools and teaching kids about the importance of teamwork. He also is a Community Leader and Ambassador for Toyota and can be seen often on the concourse of the Flyers' arena, the Wells Fargo Center, interacting with fans, and presenting awards to military guests during Flyers' home games.