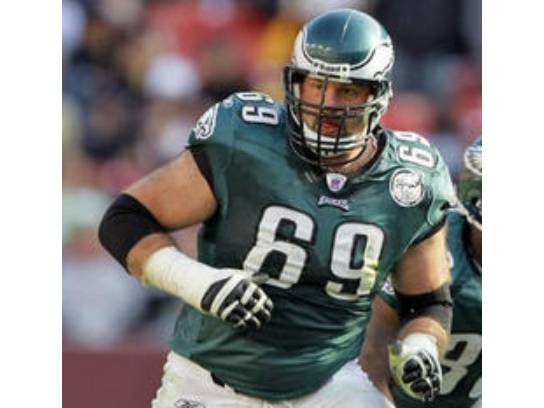 Dine with Jon & Loretta Runyan at The Capital Grille in either Philadelphia, PA or Cherry Hill, NJ. This is a unique opportunity to learn from Jon and his wife on what it takes to be a professional athlete and a member of the US House of Representatives.

Jon Runyan is an American athlete (former Philadelphia Eagle) and politician who was the U.S. Representative for New Jersey's 3rd congressional district from 2011 to 2015. Before entering politics, he was an American football offensive tackle in the National Football League, where he played for 14 seasons. Jon holds 5th on the list of most consecutive starts in the NFL. He started in 193 games during his NFL career and 144 of these starts are with the Philadelphia Eagles. He was also a participant in the 2003 Pro Bowl following the 2002 NFL season.

Jon was drafted by the Houston Oilers in the fourth round of the 1996 NFL Draft and later played for the Philadelphia Eagles and San Diego Chargers. Runyan was the last active NFL player to have played for the Oilers. He played college football at Michigan where he was a 1995 All-Big Ten Conference selection. In high school, he had been an All-State (Michigan) selection in basketball and two-time state champion shot putter. He retired at the end of the 2009 NFL season and launched his campaign for Congress against incumbent freshman Democrat John Adler, winning the general election on November 2, 2010.

Beginning in 2016, Runyan became the Vice President of the Policy and Rules Administration for the NFL.

Loretta Runyan is the wife of former NFL player Jon Runyan. She has 3 children, Jon Runyan Jr., Bella, and Alyssa. Jon Jr. was drafted in April by the Greenbay Packers after a college football career at University of Michigan where his father played as well. Alyssa is a rising junior at Purdue University studying physical therapy and Bella is a 2020 high school graduate who will attend Villanova University this fall and participate in the women's basketball program.

Loretta served as a police officer in Houston, TX for 11 years and shined at the White House as a Congressional wife while Jon served 2 years as a member of Congress.

Loretta's son Jon Jr. was diagnosed from a young age with dyslexia and she dedicated many challenging years to working on his performance, and teaching him to have confidence in his abilities and skills. Her husband was also diagnosed with dyslexia and she knew that succeeding was possible but that it would take her being hands on, persistent and relentless to get him through this.

Loretta's story is for every mother that is faced with a child that might be diagnosed with something that seems rare or debilitating but you find the answers, the resources, and the strength as a mother and as a family to see your way through. For many athletes, or anyone who might be afraid to share certain things that they are dealing with because of fear, what others will think, or how they will respond you are not alone.

Her story will inspire you to believe in yourself and your abilities in spite of the challenges. Overcoming is a choice, and one that we can all make to still fulfill every dream and goal you ever wanted to achieve. Connecting with the proper resources for knowledge, and other people who too might suffer from the same thing is powerful to help get you through.