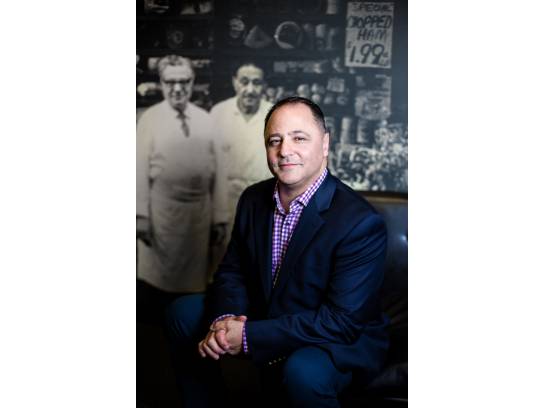 Join 3rd generation owner and President of Di Bruno Bros, Bill Mignucci at their flagship store in Rittenhouse for lunch at Alimentari and go on a behind the scenes tour of the store.

As the President of Di Bruno Bros., Bill Mignucci, Jr. has been at the helm of the family business as it evolved from a single-store, 12-employee operation to a multi-unit organization with hundreds of employees. Di Bruno Bros. is part of the fabric of Philadelphia and an active participant in Philadelphia's diverse and growing food community. Bill grew up in the family business, which was established in 1939 by his grandfather, Danny Di Bruno, and Danny's brother Joe. Bill began working at Di Bruno Bros. at a very early age, and upon graduating from Drexel University in 1990, he and two of his cousins purchased the flagship store in Philadelphia's historic Italian Market.

The Di Bruno Bros. enterprise now operates six retail stores and a restaurant, an e-commerce/mail-order business, a full-service catering operation, a specialty import, distribution and manufacturing business, and a 12,000 square foot commissary kitchen. Bill is a true believer that a company's number-one asset is its people and he is proud of building an organization filled with Culinary Pioneers who practice and adhere to common business fundamentals. Like their predecessors, Bill and his cousins believe that if you prioritize your customers and employees before the bottom line, the bottom line often takes care of itself in the long run.

Bill is committed to expanding Di Bruno Bros. without diluting its legacy and core values. He believes the key to achieving this goal is to practice and ingrain the core value of "Servant Leadership" deeply into the culture of Di Bruno Bros. Servant Leadership strengthens and preserves the fabric of the Company by valuing, developing, empowering, equipping and - most importantly - genuinely caring for the people that we work with every day. For Bill, it is by far the most powerful and fulfilling part of leading Di Bruno Bros. Donating more than $100,000 annually in funds, products, and services to local and national charitable organizations, Di Bruno Bros. is always proud to support the Philadelphia community that has been our home for over 80 years.