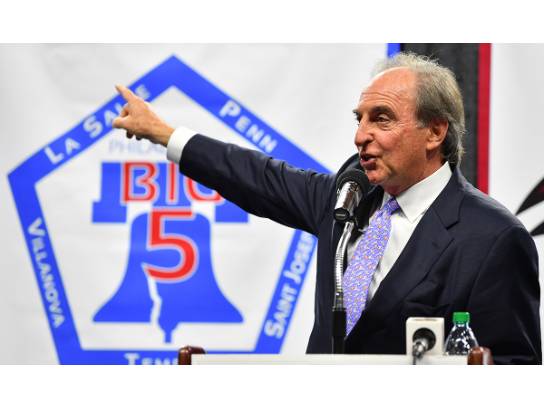 The winning bidder of this package and three guests will enjoy a delicious meal at Del Frisco's with Temple University & University of Pennsylvania former men's basketball coach, Fran Dunphy. Not only has Fran made an impact in the sports world, he has also made an impact here at the House. In 2019, we honored Coach Dunphy with the Jimmy Murray Community Leadership Award. The winner of this package will also receive (4) tickets to a Temple Basketball game in the 2020 season.

Fran Dunphy Former Basketball Head Coach Temple University Francis J. Dunphy has been a part of collegiate basketball for six decades. He started as a student-athlete playing basketball for La Salle University, co-captaining the team his senior year. He was drafted into the United States Army in 1970, and his first coaching position was as an enlisted assistant coach at the United States Military Academy. From 1975-79, he served as an accounting teacher, guidance counselor and head basketball coach at his high school alma mater, Malvern Preparatory School. In 1979, he was named assistant coach at La Salle, and one year later he joined the coaching staff at American University. He returned to La Salle in 1985 until 1988 when he went to the University of Pennsylvania. In 1989, he was named head coach at Penn, where he led the team to 10 Ivy League titles in his 17 years there. In 2006, Dunphy became the first person to serve as a head basketball coach at two Philadelphia Big 5 institutions when he was named head coach at Temple University, succeeding Hall of Fame coach John Chaney. Dunphy, known as "Mr. Big 5", has worked at or attended four of the Big 5 schools. At Temple, Dunphy had a successful tenure, including being named Big 5 Coach of the Year in five of his 13 seasons and Conference Coach of the Year four times. In 2018, he was awarded the national Dean Smith Award. In 2019, he won the Temple University honors Professor of the Year and received an honorary degree from Temple and the Gene Bartow Award. A beloved professor in the Fox School of Business for the past 12 years, Dunphy has co-taught an honors course entitled Management, Theory & Practice: From the Locker Room to the Board Room, in which he teaches students the importance of management skills and integrity. One of the winningest coaches in the NCAA Division 1 with more than 500 victories, he has coached eight Conference Players of the Year, three Conference Rookies of the Year, 58 All- Conference honorees and five perfect Conference seasons. During his career, his teams made 19 postseason appearances, including 17 NCAA Tournament berths and 2 NIT Tournament berths, and won three Atlantic 10 Tournament Championships. Dunphy is the heart of Philadelphia basketball and has always impressed upon his players the importance of being successful both in the classroom and on the court and to be engaged and committed to their community. He models his message-as a native son of Philadelphia, he is deeply committed to serving his community and is a leader for Coaches vs. Cancer of Philadelphia, as well as a member of their National Council. He serves on the board of Big Brothers/Big Sisters of Greater Philadelphia. Both in basketball and in life, Dunphy is an icon of good citizenship and leadership. In 2019 he received the John Wanamaker Athletic Award, given to those who have done the most to reflect credit upon Philadelphia and to the sport in which they excel.