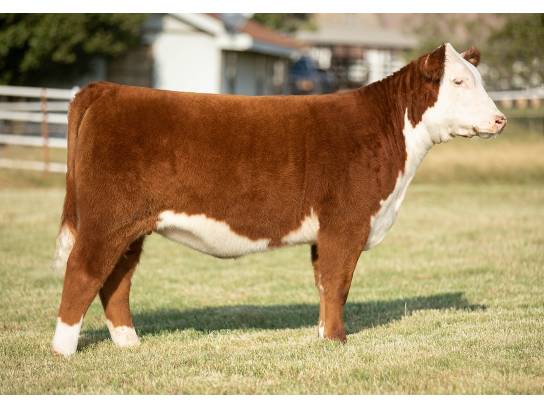 Full sisters sell as lots 9 and 10
The donor dam known as "3560" at McKay Cattle Co. was the Grand Champion Horned Female at the 2015 National Western Stock Show and has become one of the most prestigious donors in the country. She has produced countless high sellers including just last fall a daughter, Monroe, commanded $55,500 for ˝ interest. Not only has she produced high seller she has produced winners. The Sims family exhibited a horned daughter that was crowned Grand Champion at the 2018 OYE and 2017 Tulsa State Fair. The Wheeler family exhibited a full sister that was named Reserve Grand Champion Female in the Junior Show at the Western Nugget. The Barron family successfully exhibited a daughter that was a division winner at the 2018 NJHE held in Grand Island, NE.
A son named Rico was the Reserve Grand Champion bull at the 2017 Fort Worth Stock Show and another full brother in the 2019 Cow Town Invitational was the $15,000 high seller.
3560 has flat out worked and continues to work to multiple matings and her daughters below selling by 347 are no exception.

Sterling is the has the big-time hair of the three sisters. Square hipped and cool Sterling will be fun to lead around the ring during her show career. This female just has the look of a big time show heifer. She has the foot, bone, hip, neck and body to be successful at any level you want to be!