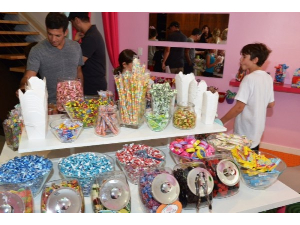 Enjoy a one-hour dance party on the date of your choice at Sweet Buddha Candy Shop on west Armitage in Chicago, partnered with Chicago Loves Dance. Exceedingly popular among 4 thru10-year old children, their birthday parties are always a hit! The birthday guest of honor will be in the spotlight making sure to create an unforgettable day. Follow along to interactive dance leads, learn choreography to the newest pop/dance songs, and enjoy party games such as freeze dance, hula hoop contests and more! Party includes table-ware and a free trip around the candy bar for all guests. Expires March 1, 2015. Based upon availability. Pick up a few fabulous party favors at Hold That Thought in Chicago with a $60 gift certificate. Donors: Chicago Loves Dance, Hold That Thought