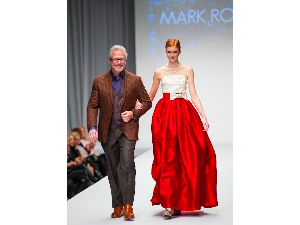 You'll be ready for any red carpet with this custom-designed Mark Roscoe couture gown. Designer Mark Roscoe has been actively involved in the fashion industry for the past 30 years. Specializing in distinctive, one-of-a-kind pieces that evoke a feeling of timeless elegance, grace, and style, Mark Roscoe has made a name for himself in the fashion world. Impeccably designed and tailored to reflect the true personality of the most discriminating clients. Mark Roscoe's designs have appeared at some of the most prestigious events, including the Academy Awards and the Grammy Awards. Donor: Mark Roscoe