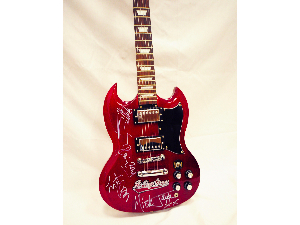 Take home a classic and become a part of history with this autographed guitar by none other than The Rolling Stones! This red SG styled electric guitar signed by Mick Jagger, Keith Richards, Ron Wood, and Charlie Watts is definitely a memorable keepsake! Donor: Andrea Javor