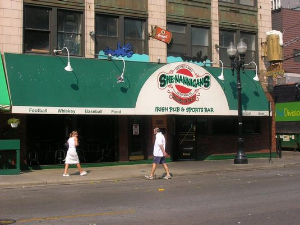 With one big screen TV and 20 monitors, this sports bar offers great sightlines plus a masculine decor with brass railings, pennants, and black-and-white photos of professional wrestlers from the 1950s on the walls. On tap: about 176 microbrewery beers and more than 20 single-malt scotches. Have a party with a one customer appreciation party at She-Nannigans. A 2 hour LMG sponsored party for 20 people. Includes domestic drafts and well cocktails. Excludes all holidays. Expires on March 8, 2015. Donor: The Lodge Management Group - She-Nannigans