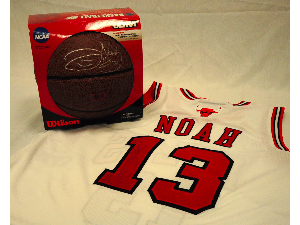 What Chicago Bulls fan would pass up this autographed Chicago Bulls jersey and basketball signed by none other than Joakim Noah! Take home this amazing collection today! Donor: Noah's Arc Foundation/ Joakim Noah