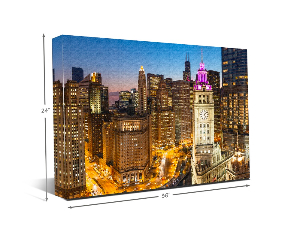 This 24x36 gallery wrapped canvas print by Nick Ulivieri depicts one of Chicago's most stunning vistas. This scene was photographed from the Tribune Tower's crown, 25 stories above the Magnificent Mile. Nick Ulivieri is a professional commercial photographer based in Chicago. Nick specializes in food and architectural photography, and donates his time and talents to Bear Necessities Pediatric Cancer Foundation. Printing and services provided by SpeedPro Chicago.