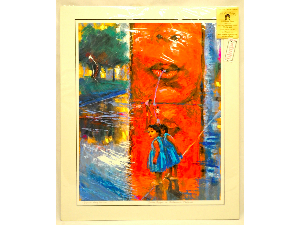 Warm up that blank wall in your home or office with Double Dippers in Millennium Park by Nancie King Mertz. This gracious painting measures 20" x 20" and includes a generous 20% off framing. This art piece is not exchangeable. Donor: Art De Triumph & Artful Framer Studios