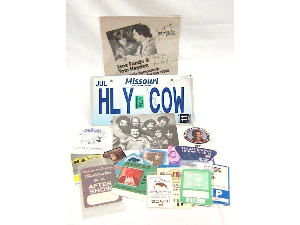 Give the most unforgettable signature gifts! The assortment includes a 1969 Christmas card signed by all 7 of the Chicago 7 (Abbie Hoffman, Jerry Rubin, Bobby Seale, etc.), Harry Carey's license plate, a poster signed by Jane Fonda & Tom Hayden and lastly, back stage passes from bands of the 1980's! Donor: Bradley Seidman