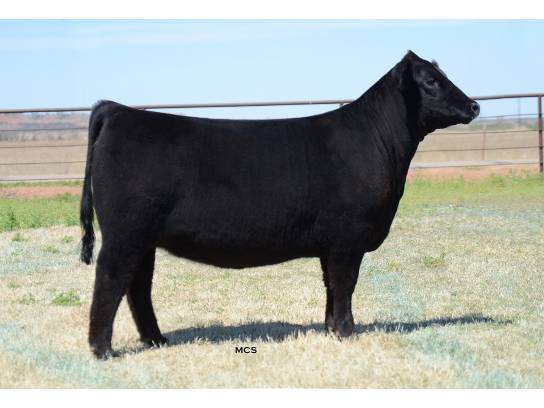 Lot 1 offers length of neck, balance and eye appeal without sacrificing power. Her added dimension and broodiness suggest long-term value and return on investment. Whether enhancing your herd's visual quality or adding to your donor pen, here is a female you don't want to miss. Lot 1 has the length of neck necessary to catch the judge's eye and the soundness and sweep of rib to keep his attention. Her dam is an example of the successful mating of First Class and the legendary J&J Queen 414 that includes the 2015 OYE Supreme Champion Female.

The sire of lot 1, Colburn Primo 5153, is a product of one of Style's most decorated daughters and the amazing Dameron First Class while his maternal granddam is Silveiras famous donor, Saras Dream. Primo's full sisters were some of the most dominating show heifers on the circuit.

The grand-dam of lot s 1 and 2 is the elite Angus donor J&J Queen 414, who has been proclaimed by many as Northern Improvement's greatest daughter. This female is proven to generate unparalleled "look," quality, structural soundness and power. In addition to the dam of lots 1 and 2, daughters of 414 have dominated the show circuit in Oklahoma over the past few years for the Myers family. Additionally, as a result of a flush purchased by Walter Cattle Company and Steve Gilbert in the May 2007 J&J Sale, 414 is the dam of the 2010 Reserve National Champion Percentage Simmental Heifer, WLTR Lydia, and the 2010 National Western Stock Show Reserve Grand Champion Percentage Simmental Bull, WLTR Renegade, who was also named Grand Champion Percentage Bull at the 2010 American Royal. Until their dispersion in May 2010, 414 served as the cornerstone donor for J&J Cattle Company and since that time she has continued to add to her legacy in the Price and Shultz programs.

During her tenure as a lead donor for J&J and Price Farms, Queen 414 sold over 30 embryos to average over $840 each and allowed Price Farms to recover over $21,000 of their initial investment within the first six months of owning her; she now has their investment way in the black from just embryo sales. Embryos out of this prolific donor sold in the 2010 Denim and Diamonds Sale, where five embryos sold for $700 each to Fred Schultz, and five embryos by BC Lookout brought $1,050 per embryo to Circle M Farms of Rockwall, Texas. In the 2011 Oklahoma Angus Gathering, 20 embryos by Lookout, Macho, Dream On and Meyer 734 totaled $19,500 to average $975. In the 2011 Price Farms Sale, 15 embryos from 414 sold for an average of $1,050. In the 2012 Denim and Diamonds Sale in Denver, 18 embryos by Final Product, 3C Macho and Meyer 734 sold for $18,900 to average $1,050. More recently, embryos by Macho sold in the Branson Production Sale for $1,200, and in the 2012 Oklahoma Angus Gathering to Circle M for $1,100, and Fred Schultz acquired half interest in 414 through a private treaty sale. Recent full sibs to these embryos include the Reserve Grand Champion Percentage Bull at the 2012 Simmental Breeder's Sweepstakes who was also named Grand Champion Percentage Bull at the 2012 Tulsa State Fair, and two heifer calves that sold in the Bushy Park Farms sale for $8,200 and $7,900.