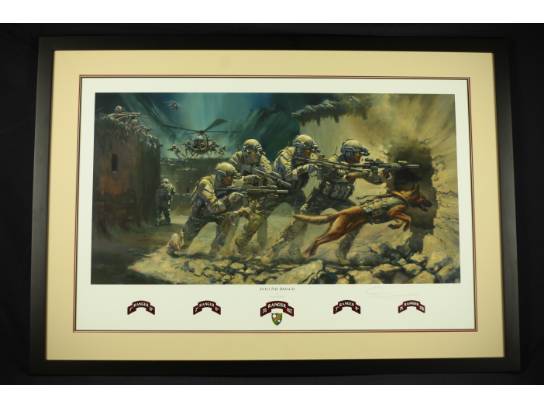 This print is no longer available and very to hard to find. .

In response to the 9/11 attacks, our nation called upon the 75th Ranger Regiment as one of the first units to respond to the War on Terror.

This limited edition print portrays a Ranger Fire Team, with their distinctive equipment and armed with a SCAR-H and M-4s, and a Military Working Dog assaulting through the breach during a raid in the Global War on Terror.

A Ranger Sniper Team and AH-6's crewed by members of the 160th Special Operations Aviation Regiment are in overwatch. The compound is typical of those that the Rangers assaulted in both Afghanistan and Iraq. This print is dedicated to Rangers of all eras who have gone "Into the Breach," especially those who made the ultimate sacrifice.