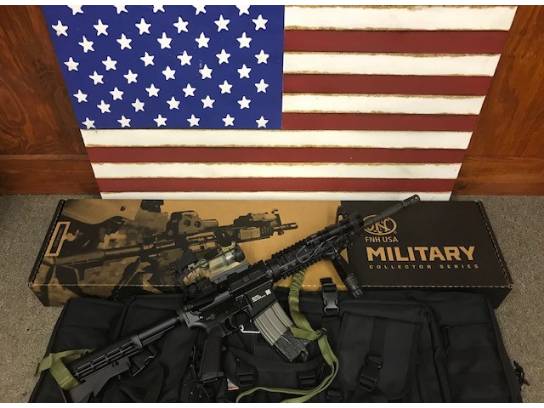 Auction item is a FN (Fabrique Nationale) Military Edition M4 rifle.
This rifle was offered for civilian purchase by FN and represent the semi auto version of the rifle issued to U.S. forces at the onset of the Global War on Terror (GWOT) after 9/11

SOWW has acquired various items from Special Operation veterans that they carried overseas in combat theater. These items were donated to SOWW and have been installed on this rifle to include:
- custom made tubular nylon Ranger sling
- "old school" metal M4 magazine that has been "taped and tied" to Ranger Regiment SOP
- front vertical grip (old style -narrow)
- Trijicon ACOG magnified optic with mini red dot mounted on top w/ impact guard.
- Sure Fire tactical light with pressure switch.

Own a piece of firearm history from the makers of the world's most battle-proven firearms. The FN 15 Military Collector Series M4 brings to market a military replica rifle made to FN's, and the U.S. military's exacting specifications. The semi-automatic rifle is chambered in 5.56x45mm NATO and features a 16-inch, 1:7 RH, button-broached, and chrome-lined barrel. The UID-labeled lower receiver is equipped with an ambidextrous selector switch, just like its select-fire big brother, the M4A1.