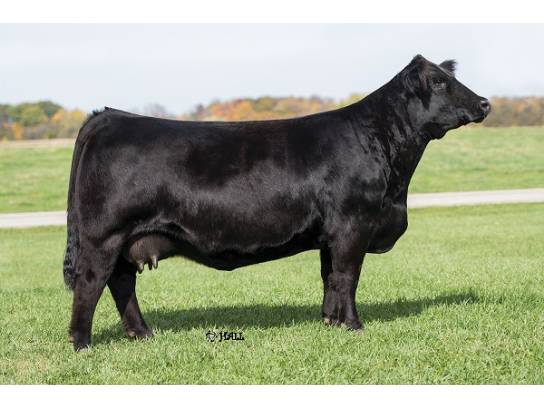 HEIFER EMBRYOS. An awesome combination for Sim-Angus success from the ballroom and this $185,000 Simmental legend, Serena 74Y!
Serena is already the source of the first $100,000 female produced from a Frozen Gold genetics purchase (a pregnancy from her sells in this sale as Lot 29) and she is the dam of major winners now by 9 different sires and nearly $2 million in progeny sales to date. She ranks as one of the most prolific Simmental cows in breed history.
Sons of Serena include the major winners valued up to $184,000 STCC Jacked Up and Jack Around - both sires of winners and calves up to $40,000 so far - and STCC Plymouth Rock and STCC Believe In Me, both deceased.
Daughters of Serena 74Y include the $100,000 Serena D74 (a heifer pregnancy from her sells in Lot 29) that was a multiple national winner plus not less than 4 class winners at the 2016 AJSA National Classic plus winning daughters by Pays to Believe, Broker, Northern Light, Relentless, and now Primo; the combination used to yield Camryn Clapp's 2019 Dixie national Grand Champion Sim-Solution Female.
This cow has been combined with Angus bulls on two occasions. The first produced the $24,500 Fifth Overall Female of the 2016 Indiana State Junior Fair, and the second gave us the $35,000 Primo daughter mentioned above. Bismarck ought to be a cinch.