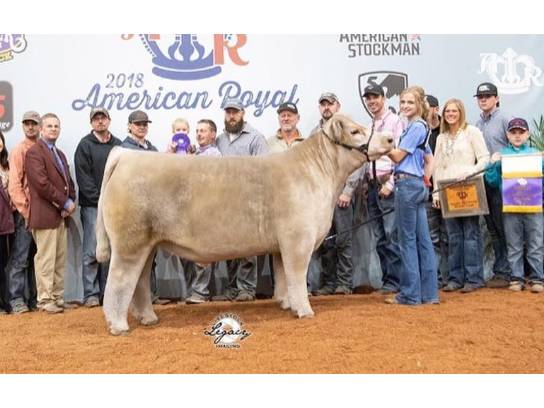 MALE EMBRYOS. Hellbusch 180 is one of the absolute best show steer makers in the game today. She is unrelenting in her ability to deliver extreme quality and major-winning prospects literally every season. To date, this cow has sold 40 calves over $4,500, 18 over $15,000 and 2 north of $50,000. Most of her best calves have been full siblings to these embryos and they have been great regardless of sex. This cow is especially consistent with Monopoly and there is another great crop from her on the ground now .
Donor 180 is the dam of Julia Frye's show steer by Here I Am that was the most decorated calf on the planet last season when he won multiple prospect shows including Sioux Falls and Reserve Grand of the National Western before finishing up as the Grand Champion Steer of the 2018 American Royal.
That calf was a $69,500 baby but he is not the first elite one from this cow, not by a long shot. The older brother to Julia's steer by Monopoly was the Grand Champion Steer of the 2015 Arizona National and his full brother was a $56,000 prospect in the fall of 2016.
This cow also raised full sisters by Monopoly that were selected as the Grand Champion Market Heifers of the 2016 Aksarben and the 2015 Missouri State Fair. Find another cow that did that!
Hellbusch 180 takes show steer production very seriously. It does not make sense to sell embryos from her because she can strike gold literally at any time - she did it again this winter - and there is no way the eggs can bring enough. But she makes too many to keep them all, plus that's just greedy anyway. Send Scott a thank you note when these calves hit the pay window.