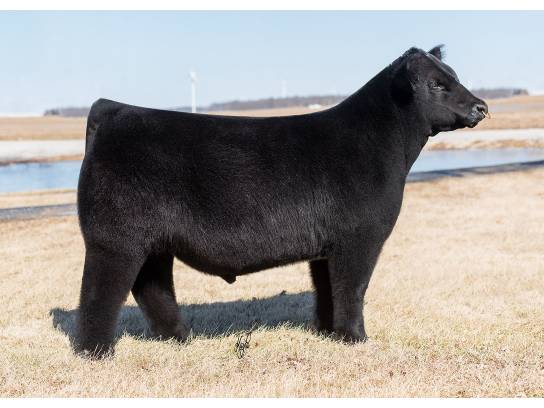 NOTE: Buyer may elect to add 25% to hammer price - AUCTION NIGHT ONLY - to acquire 100% interest in the bull.

What a bull. The next big thing for the next level of success. As "maternal" as he can be yet delightfully "clubby" and just straight up good all the way through. Bluestone is the next big thing from a cow family that refuses to lose.
This is the first calf - born 71# and unassisted - from the one and only clone to the amazing GOET Rihana 4Y (aka Winnie), I-80's greatest daughter and a donor that is already a Frozen Gold legend.
Previous calves from "Winnie" include Win Dixie 8B, the most decorated Maine-Anjou female of the 2014-2015 show season when she won the both calf divisions at the American Royal and the NAILE and went on to be Grand Champion of the 2015 American Royal Open Show and Reserve Champion of the Junior Show before she was Grand Champion of the NAILE Junior Maine-Anjou Show and Reserve Champion of the Open Show.
Another daughter is "Kiki", the Calf Champion Female of both the junior and open shows at Kansas City and Louisville in 2015 - she made her Frozen Gold debut here in 2018 for Gensini and Wisnefski, IL. And yet another full sister topped the 2017 OMAA Sale at $18,500 to Dickson, OH, and promptly won Reserve Champion in Ohio Expo Junior Show the next day.
Those heifers are full sisters to X-Rated, the now-deceased $30,000 top-seller of our 2016 sale. And, they are maternal sisters to steers selling for as much as $53,000 and winning for the Boerson and Vickland families. Plus another maternal sister is the dominant Bismarck daughter that the Chamberlin girls showed to wins like Supreme at the Hoosier Congress and Kentucky Expo plus Champion MaineTainer of the 2017 Indiana State Fair and both the junior and open shows of the American Royal to name a few.
More top calves include a winning heifer for Macie McCollum, TX, the top-selling bred heifer of the 2017 Winners' Circle Sale, and the top-selling embryos of our 2016 Frozen Gold.
This pedigree just wins, plain and simple, and this bull is really outstanding. Come and see him for yourself. He was barely touched until 2019, and not a lot after that to be honest, but he looks great in every season including mud, snow, and rain so far; he looked really great after his first bath and haircut for this photo. He has the modern tools needed now on so many plainer cattle and we know, based on the legitimacy of his pedigree, that he will breed true for his awesome structure, mass, standout style, and, oh boy, that amazing wall-to-wall shag. Winnie wins again!