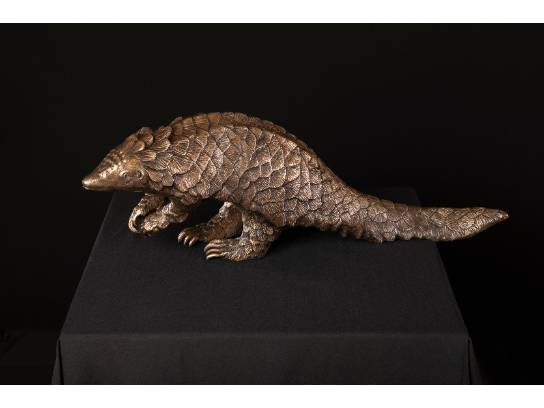 "On the Move" by Harder Bronze Works

Paul Harder was inspired to create this bronze pangolin by Jackie Chan's pangolin PSA with WildAid where Jackie taught his pangolin friends how to use martial arts to protect themselves from poachers. Paul was drawn to the walking pose selected as it seemed to convey such personality and a specialness to this amazing creature whom is one of the least known animals on the planet.

Sadly, this tough looking little mammal is on the edge of survival with some populations classified as Critically Endangered. They are the most trafficked animal in the world which has led to more than a million being stolen from the wild. The IUCN estimate that a Pangolin is taken from the wild every 5 minutes.

Rolling up creates a hard, spiky, impenetrable ball that can defeat even the jaws of lions, tigers and leopards. However, by cruel coincidence, it is this same defense mechanism that makes human capturing of the pangolins as easy as picking up a ball.

Paul Harder is a Canadian artist who loves creating bronze sculpture of wildlife inspired from his travels and adventures around the world. Paul has been donating works to WildAid over the past four years.