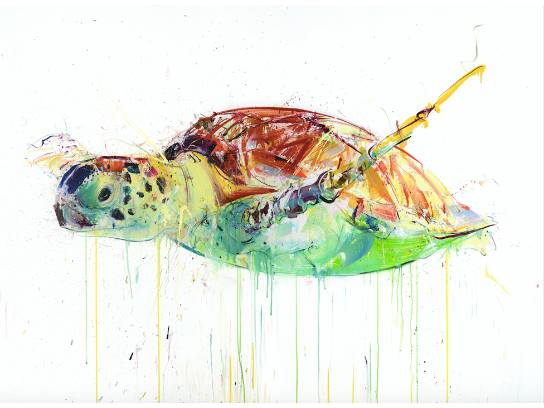 Released in 2017, this Diamond Dust Sea Turtle Edition was inspired by the plight of Sea Turtles internationally and their precious journey in life.

This edition is an Artist's Proof, one of only five from the Artist's personal collection.

Sea turtles have been around a really long time - the oldest known sea turtle fossils date back about 150 million years, making them some of the oldest creatures on Earth. Just for some context, dinosaurs became extinct 65 million years ago. Unfortunately, six of the seven species of sea turtles are either threatened or endangered. Humans pose the biggest threat to a sea turtle's survival, which contributes to problems such as entanglement, habitat loss and consumption of their eggs and meat.

Dave White is a British Contemporary Artist, who dedicates his work to celebrating popular culture and interpreting emotive issues with his signature style of painting. He supports many environmental charities with his work and installations alongside an international exhibition.