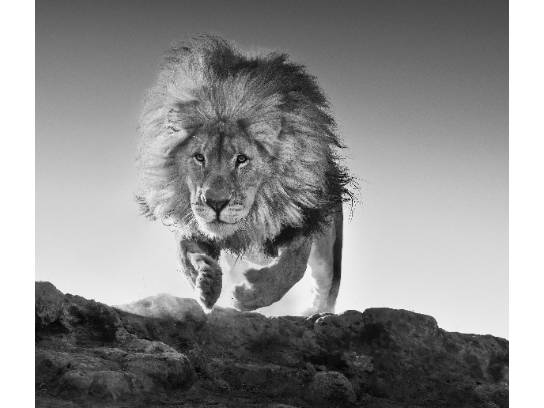 This image of a magnificent male lion is a large-scale, limited edition print. The photograph immortalizes Vayetse, who lives in Kevin Richardson's (the Lion Whisperer) sanctuary. The print is signed, editioned, and dated by David Yarrow. David Yarrow is now recognized as one of the world's best-selling fine art photographers of his genre and is represented by over 20 leading galleries around the world. Over the last two years, three of David's limited edition works have sold for over $100,000 at Sotheby's auctions in London and New York. In January 2019, David was appointed as the global ambassador for UBS bank; their collaborative campaign posters launched in Zurich airport and can now be seen around the world. Philanthropy and conservation are central to David Yarrow's passion to document the animal and human world in a fresh and creative way. In 2018 Yarrow's work raised over $2 million, $311,000 of which was raised on October 2018 in collaboration with Tag Heuer & Cara Delevingne and was directed toward the Cara Delevingne Foundation.

"To be so very close to this majestic lion was a privilege, but it was hard earned. I hope it will strike an emotional chord with all lovers of the lion and remind us that the eyes are the windows to the soul -whether they be the eyes of a human or the eyes of a cat. Of all the truly iconic animals that we cohabit our wonderful planet with, the African lion is the one that many informed people are most worried about in terms of survival."-David Yarrow

Kevin Richardson & David decided that an explosive running shot would best portray the essence of Vayetse & shot at a low angle to ensure nothing but the magnificent lion draws the eye. To photograph lions mid-run, David typically draws on his perfected remote control work. However to capture Vayetse David decided to operate the camera himself, which added to the complexity of achieving this shot. It took 2 full days of shooting to capture this image, 1 millisecond too early or late & this shot would not have worked.

David's evocative & immersive photography of life on Earth is most distinctive and has earned him an ever-growing following amongst art collectors. David's position in the industry has been rewarded with a wide range of advisory and ambassadorial roles. In conservation he is an ambassador for WildArk, on the advisory board of Tusk, & an ambassador for the Kevin Richardson Foundation. In September 2019 Rizzoli published David Yarrow's latest book. This 368-page photography monograph showcases 150 of David's strongest images from the past two years. The book features a foreword written by global NFL star Tom Brady & an afterword written by American cultural icon Cindy Crawford. All royalties from this book will be donated to conservation charities Tusk in the UK and WildAid in the US.