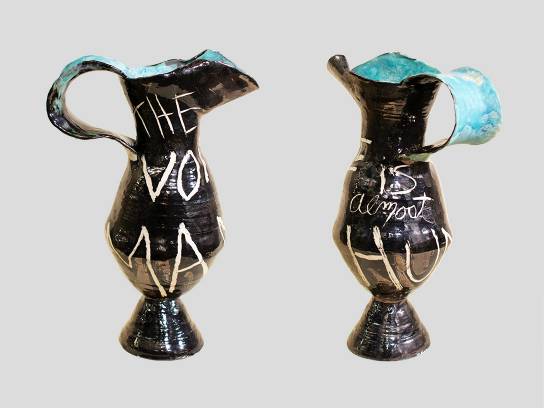 Rowland drew inspiration from cities with ancient histories of handmade stoneware including calligraphic Islamic pottery. She collaborated with Frederick Seidel on vases with his poetry.

*Buyer will be responsible for shipping costs, which will be determined after the sale and arranged with the buyer upon purchase. Estimated shipping within NYC is approximately $150, depending on the item and destination.

The estate of Susan Rowland has released 5 iconic pieces of her artwork for sale to benefit the Brooklyn Arts Council.

Rowland channeled an irrepressible exuberance through her work as a painter, printmaker and ceramicist. Rowland worked in New York for most of four decades, creating large, abstract expressionist canvasses and, later, pottery and sculpture with rough edges and whimsical animal forms. She graduated from Vassar College. In 1961 she married Dr. George B. "Robin'' Rowland. Her husband became a public health doctor when they moved to the Navajo reservation in Arizona with their two young children. Her restless personality and creative drive did not allow her to settle for long in one place. In 1967 she moved to New York City with her children. There, she studied at the Arts Students League. In 1974 she moved west again to a rural community north of Santa Fe, NM. She had space of her own in which to paint, and a rugged landscape to serve for inspiration. She was awarded a National Endowment for the Arts fellowship in 1976. Three years later, she returned to New York where she met and married her second husband, Charles P. "Tony'' Sifton, a judge in the US District Court in Brooklyn. After the terrorist attacks of 2001, Rowland pulled the first new weeds growing near Ground Zero the next spring to make monoprints. "I wanted to print the first plants that showed up, the weeds, the volunteers,'' Rowland said in a column by Times garden writer Anne Raver. She was a trustee of the non-profit Brooklyn Arts Council, where donations in Susan's name may be directed.