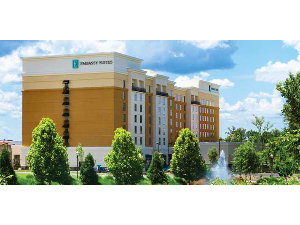 enjoy a Complimentary Two night Weekend Stay in a Standard Suite at the Embassy Suites Chattanooga/Hamilton Place with complimentary drinks and made to order breakfast. Enjoy a unique blend of luxurious accommodations and souther hospitality at the all-suite, full service Embassy Suites Chattanooga/Hamilton Place hotel. Set in the Waterside Lifestyle Center directly across from Hamilton Place Mall, our hotel's ChChattanooga, TN location is only minutes away from Enterprise South Industrial Park and 4 miles from Chattanooga Metroploitan Airport. enjoy easy access to many local attractions including Lookout Mountain and downtown Chattanooga. Expires March 4, 2016