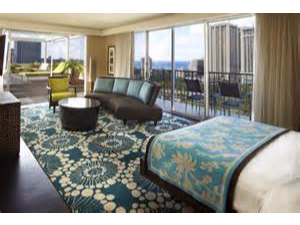 Relax with a one-night stay in a partial ocean view room at The DoubleTree by Hilton Alana Waikii, an upscale boutique hotel conveniently located at the entrance to world famous Waikiki just 8 miles from Honolulu International Airport and just moments from Waikiki Beach. Includes breakfast for (2). Expires April 30, 2016. Hotel will ship this item directly to the winner